The Architecture of Medieval castles were ambitious - state of the art castles of the Middle Ages. The medieval era is also referred to as the Middle ages and we have spanned this period of time from the Norman Invasion of 1066 to the Tudor dynasty of the Renaissance which ended in 1603
The changes in Medieval Architecture were made in response to:

* Social and cultural changes during the Medieval era.
* Changes in needs of the population.
* Changes in technology, in terms of the building tools, which were available of medieval castle architecture.
* New building techniques, construction methods and ideas for new styles of Medieval Castle architecture.
* Symbolic reasons and designs in the style of architecture or practical reasons for new locations for castles.
* The desire for more comfort in the castle interiors.
Medieval styles of architecture sapanned the following periods of English History from 1066~1603
* Romanesque Medieval Architecture of the Normans.
* The Edwardian Medieval Architecture of the Concentric Castles.
* The Medieval Gothic style of Architecture favored by the Platagenet.
* The Medieval Coastal Forts and Palaces of the Tudoe dynasty during the Renaissance. 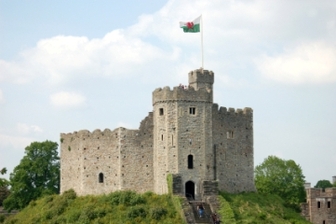 The Medieval castles built to the design of Norman architecture had many problems in terms of defense which needed to be resolved. The wooden motte and bailey castles were at risk of fire, therefore their towers were quickly replaced by the stone keeps - which also had their problems. 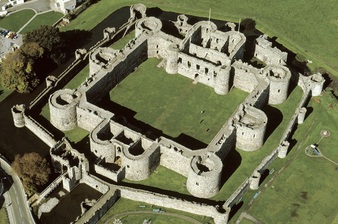 * Large blocks of stone used by the Normans, were replaced by shaped stone. The stone of gothic castles was cut with precision.
* The Norman hollow walls were replaced with solid walls and pillars - allowing then to hold far greater weights- it provided much bigger castles.
* Early English Gothic architecture emphasized height and made good use of the pointed arch.

* The pointed arch could support greater weight, allowing the walls of the Medieval Castle to be thinner with wider window openings.
* The introduction of flying buttresses in Medieval Castle Architecture distributed the weight of roofs and walls right down to the ground.
* Gothic Medieval Architecture and design allowed architect to spread the weight to different points of the castle.
* Towers were often surmounted with very slender towers.
* Improved Medieval tools such as chisel, as opposed to axes, led to more decorative designs.
* Sculptures of stone Gargoyles were introduced as waterspouts protecting the foundations from rain. 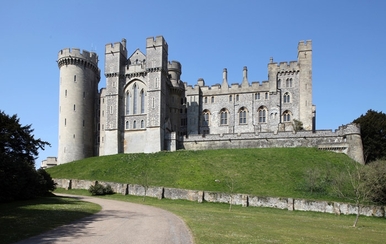 * The Decorated Gothic Medieval Architecture style was characterized by wider windows.
* The wider windows were decorated with tracery (a system of window decoration) and ornamentation.
* Gothic Rose windows are associated with great gothic churches and cathedrals however some small rose windows were featured in the chapels of medieval castles. Rose windows were a decorative by-product of the development of stained glass. 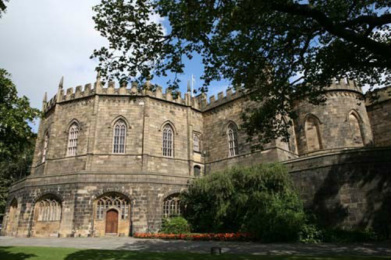 It is characterized by the following elements: